Lost your Password or Need your Activation Link Resent? Please enter your email address. You will receive a link to create a new password via email.

Enter Your Email & Get Started

What are TOP 3 PICKS?

We analyze your favorite tasting notes from the Picks App to help you find your perfect bottle. We’ve generated your top matching bottles based on your specific taste profile derived from real tastings you have done in the app. As you continue to add tasting reviews, we’ll get better and better at making recommendations for you. Check back here often for your latest top matching bottles.

We analyze your tasting reviews to determine your unique detailed taste profile, and then we compare you to the crowdsourced taste profiles of bottles from the community. Our algorithms calculate how much you and the bottles in our shop match, making shopping for a bottle you are bound to love a breeze! As you do more tastings in the app and your tastes evolve, so will your match scores! Check back often as your tastes evolve.

Conduct tastings in the Picks App to generate matches!

Want to see your Matches! Get started by downloading our app, grab any bottle you have at home and log some tastings. We’ll begin building a taste profile for you and you’ll start getting matched! Already have the app? Click “JOIN / LOGIN” in the menu using your app account email to get your matches. 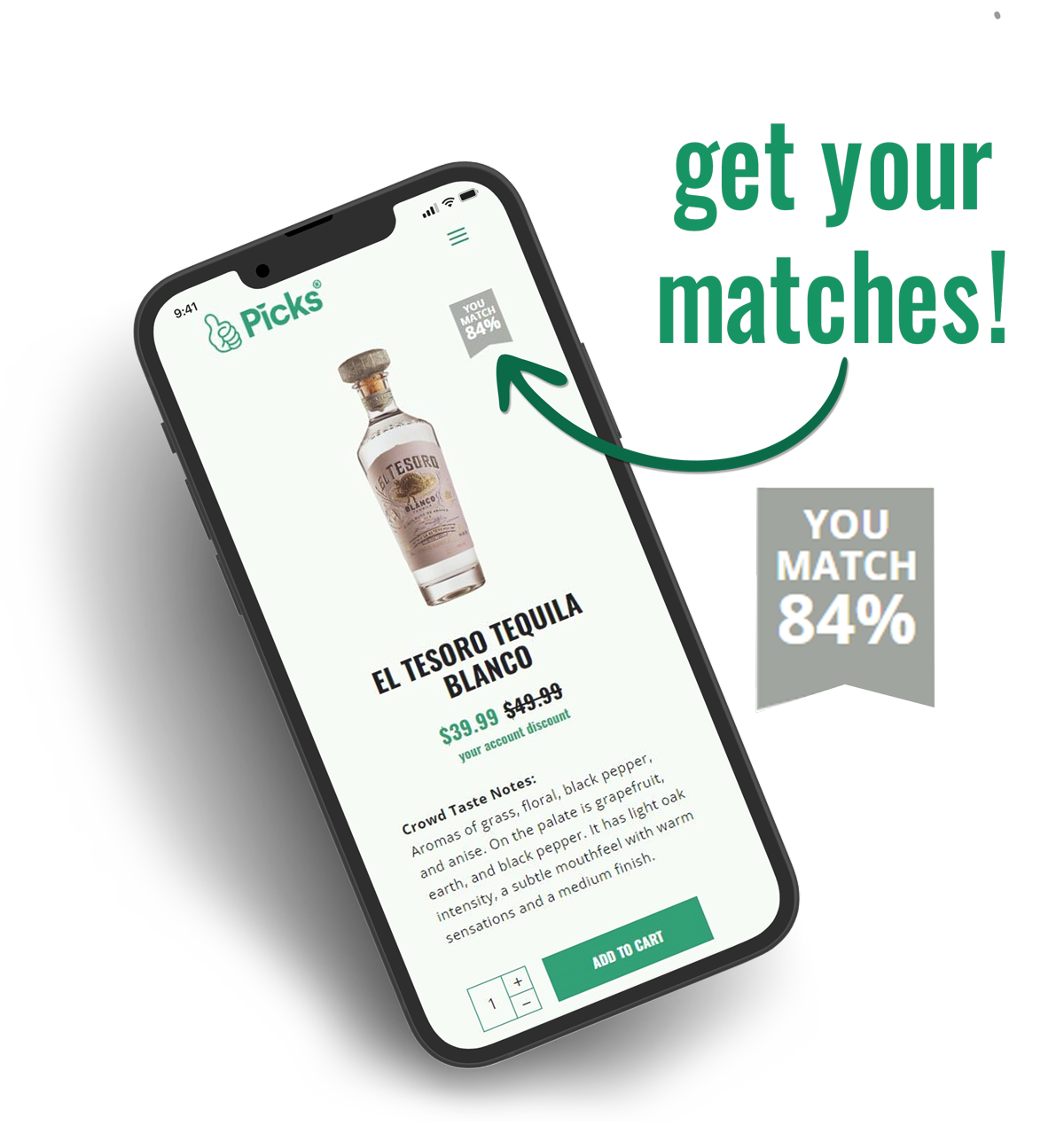 Kicking Off A Bulletproof Infinity Bottle: Part One

While master blenders have been marrying and mixing barrels of spirit for centuries, not everyone has access to hundreds of barrels of whiskey to mix up in their kitchen. What the discerning drinker has at least a couple of, though, is bottles of whiskey. When you get to the bottom of a bottle, maybe the last pour or two, how do you like to send it off?

A popular concept is the Whiskey Infinity Bottle – an eternally blending, changing bottle of your favorite pours that changes a little bit with each bottle you send off. When finishing that next bottle, sit down and pour a glass for yourself, and contribute those last couple of ounces to a bottle you’ve ear marked just for final pours. Take a sip here or there – it’s exciting to investigate how the profile changes with each bottle you add.

Ideally, an infinity bottle grows to become greater than the sum of its parts. As you add different bottles with different proofs, mashbills, and ages, the goal is to end up with a perfect harmony of flavors – each whiskey making the best of the others weaknesses. This may seem difficult or risky (who likes wasting whiskey?!) but in reality, it isn’t too tough if you consider some advice from our past attempts.

Here are some tips and tricks to make the most of your infinity bottle, and we’re here to help..

The first tip of a whiskey infinity bottle is to avoid mixing bourbon and scotch. This may seem obvious, but it isn’t always. This is especially apparent when you throw a peated Scotch in the mix. We’d recommend, if you want to get Scotch involved, that you kick off a second Scotch only infinity bottle. One for bourbon/rye, etc and one for Scotch.

As you’re mixing up your infinity bottle, over time you’re going to notice changes. Some additions may not work so great, but the next bottle added may transform your bottle from “good” to “WOW” – when you get to this point, wouldn’t you like to know what was in it at the time? Keeping notes about what you add and when is key to getting the most from your infinity blend. We like to note which bottle you added, on what date, and how much. This combination of notes makes it easy for you to replicate your bottle’s profile along the way, assuming you don’t drink too much of it at one time 🙂

You may be hesitant to include a barrel proof bourbon with your lower proof bottles, but we say give it a go. A lot of times, a younger, more mellow bourbon can really accentuate the profile of a high proof rye or bourbon, while helping manage some of the heat. Don’t be afraid to put some wheated bourbon in with a high rye, you name it. Experimentation is key when it comes to developing the character of your bottle.

After you’ve added the end of a bottle, or a new component, give it some time to marry. In this case, marrying refers to letting the components sit and mingle. You don’t have to wait a long time, but give it a day to sit and integrate before giving it an in depth tasting. Sips after you add a new bottle aren’t discouraged, though! If you’re curious about an alternate, more industry standard method of marrying, then you’re going to want to read Part II of this series – as we talk about the marrying cask, or letting your blend marry in an oak vessel for a short period of time, rather than in glass.

That’s all for today! Be sure to check out Part II of this short series for tips on your Infinity Bottle and oak aging your blend! If you’ve done an infinity bottle prior to this, how did it go? What components do you think really made it shine? Let us know in the comments!

By Jay
By Jay